ETF Robotics group at School of Electrical Engineering in Belgrade

A consortium of European robotics labs is developing a humanoid robot by copying not only the overall form of the human body but also its inner structures: bones, joints, muscles, and tendons. The goal of the ECCEROBOT project is to create an anthropomimetic robot whose body moves and interacts with the physical world in the same way our flesh bodies do. The researchers used thermoplastic polymer, elastic cords, and other soft, flexible materials to build the torso, arms, and hands.

One potential advantage, according to the researchers: shake hands with ECCE and it won’t crush your bones.

The result is fascinating, if a bit creepy. The robot looks eerily organic, with parts that look like bone and muscle. The researchers say that humanoids built with metal parts and electric motors and actuators have limitations in the kinds of interactions they can have with humans and the environment. Indeed, they say, these limitations may affect their ability to perceive and “internalize” the world around them.

The big challenge now is devising methods for controlling such flexible (the technical term is compliant) robots. The researchers say there’s a lot of work to do in terms of understanding intrinsic movement patterns and being able to model and control these movements. Once they make progress in that direction, their ultimate goal is to use the robot’s human-like characteristics to explore human-like cognitive features. 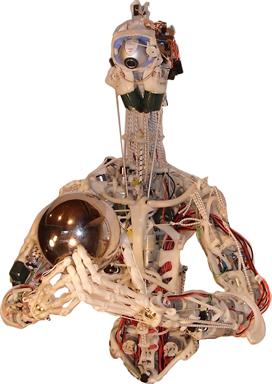 As a result, this idea has been recognized by the US Magazine Popular Mechanics, putting this concept on the first place among technology concepts for 2010.  This is the front page of the February 2010  issue. 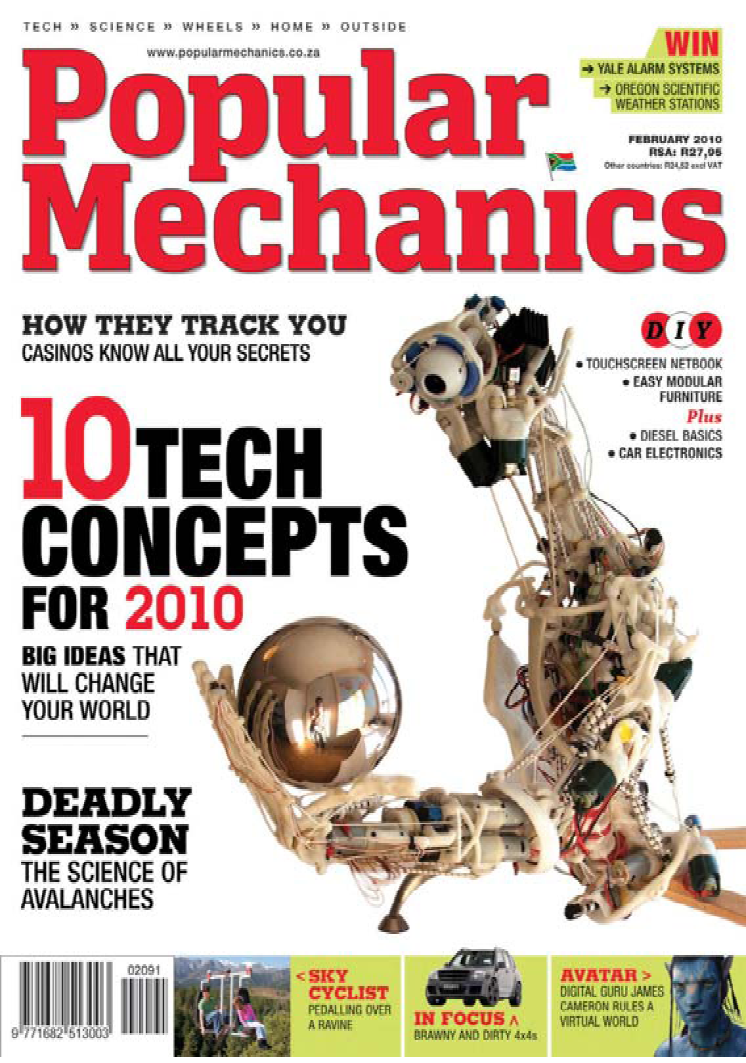 ETF will develop a mathematical model of the upper body of an anthropomorphic robot having elastic joints. In particular, we will calculate the relevant dynamic characteristics (response to different inputs, coupling between subsystems, etc), check the system parameters, and integrate these results into the model. We will also define and perform a set of experiments that are appropriate for evaluation of the system’s dynamic behavior, including both motion and contact tasks.

ETF will define, implement, and evaluate different control strategies applicable to elastic-joint systems. In particular, we will investigate feed-forward control based on dynamic models. We will find the model complexity appropriate to the defined tests of dynamic behavior by gradually neglecting dynamic effects. We will also investigate the use of feedback based on different position measurements: motor/actuator position, joint position, and both. We will introduce force feedback and evaluate the feedback concept to find an appropriate control scheme. We will perform the analysis of controlled system behavior for a defined set of experiments (tracking and stability, force response and elastic deformation, resonance, etc.). We will then propose a control structure related to the system parameters and the tasks set, and identify and quantify the benefits of compliant actuation. Lastly we will identify any outstanding problems and define the limits of the suggested approach.

3. Model for the analysis of mobile elastic-joint robot during movement and in mobile contact tasks. Classical control scheme related to system parameters and tasks.

ETF will develop a model of the mobile anthropomorphic robot with elastic joints by using the free-flier concept. In the first part of the task, we will apply the model to non-contact motion enabled and constrained by the non-holonomic wheeled base; the major issue is the effect of acceleration and deceleration (linear and radial) on posture and commanded movements. This will involve the calculation of the relevant dynamic characteristics and definition of the system parameters and system behavior. We will define the appropriate feedforward control, introduce feedback control, and examine the needs and benefits of additional sensing measurements (accelerometers, force sensors, gyros). We will then propose an integrated control strategy, and define the system parameters, control scheme, and final results.

In the second part of the task, we will apply the free-flier model to the mobile elastic-joint robot in typical contact tasks. We will perform procedures similar to those in the first part, i.e. relate the system parameters (including elasticity) and system behavior (motion, contact forces, oscillations, etc.); identify and quantify the benefits of compliant actuation; define an appropriate control scheme with feedforward and feedback components (including data from additional sensing measurements (accelerometers, force sensors, gyros, etc.); define the system parameters, control scheme, and task realization; and lastly identify any outstanding problems and define the limits of the suggested approach.

In this task, ETF will perform the final testing of the latest robot model, ECCE3. In this phase, we will experimentally define the limits of the classical approach. Working within the architectural framework defined by TUM, we will promote a symbiosis between the classical engineering approach and alternative more cognitive approaches to control by designing a control strategy that uses both. This “synergetic” approach will use classical model-based control for some levels of control, and will augment, integrate or replace it with other more cognitive strategies for other levels. We will then finalize the definition and evaluation of this new compound control strategy.

The project is funded by the EU’s 7th Framework Programme, under ICT Challenge2, ‘Cognitive Systems and Robotics’.

The consortium consists of five partners: